" Reality is a movement without direction." - UG 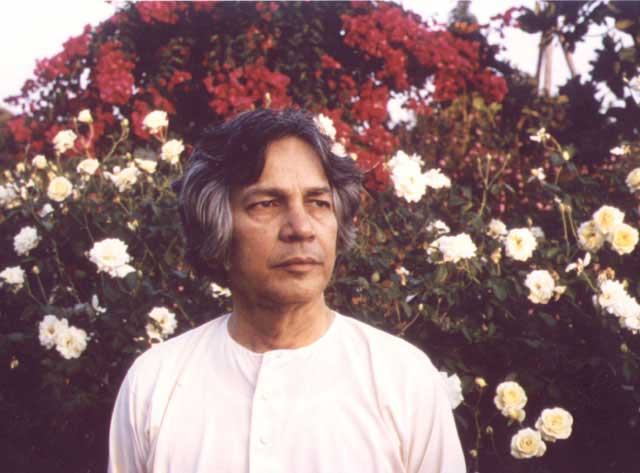 Gutsy Mahesh Bhatt sometimes enjoyed playing the role of the 'sounding board’ in UG's portals, not an easy thing to do! Gleefully lobbing questions at the ‘raging sage’, he would tease out UG’s repartee that would benefit one and all!

UG too reciprocated the gesture and recruited Mahesh now and then to act as his sounding board to send across some powerful message or pointer to the audience.

Here is one such fascinating exchange!

UG, "Hey mister, what is your name? What do you call yourself?"

Mahesh, mimicking a schoolboy, "Sir! My name is Mahesh Bhatt!"

This observation is not far removed from that of Ramana Maharshi who called into question the very basis of the 'I' or the 'self ' through his famous inquiry, ' Who am I? '. Ramana's was  a contemplative approach to de-construct the ‘self’ by probing into its basis.

Nisargadutta Maharaj, another great master, pointed out the falsehood of ‘I’ or ‘self’ in his characteristic style,

“….now, you may be a very great person, you might be a dictator of the world, but when you go to sleep you forget what you were—your name, your body, your age, your sex, your nationality, everything. This sense of a separate identity is very limited and not the truth; in fact, it is totally false.

So if that is the situation with Christ, what is the case with you?”1

Great thinkers, philosophers, sages from time immemorial have questioned the deep rooted ‘ folk belief ’ in the reality of the ‘I’ or ‘self’ or ‘entity’,  in line with masters like UG, Ramana or Nisargadutta.

Is the 'self' or 'I' then a fictitious entity, is it a 'cross we bear' or is this the psychological burden forced, imposed on us by society or culture through conditioning?

Whatever it is, the fact is, we are stuck with a 'subjective reality' perhaps like no other living creature. We are saddled with the 'I'  and its private, psychological world of wants, fears, opinions, likes and dislikes,  in a constant flux, ever changing and churning like the ocean!

Every time a thought is born, you are born. When the thought is gone, you are gone. But the 'you' does not let the thought go, and what gives continuity to this 'you' is the thinking. Actually there is no permanent entity in you, no totality of all your thoughts and experiences. You think that there is 'somebody' who is thinking your thoughts, 'somebody' who is feeling your feelings --- that's the illusion. I can say it is an illusion; but it is not an illusion to you. ( Mystique of Enlightenment)

On several occasions, UG used the analogy of the movie to explain the illusory nature of the 'self'.

When we watch a movie, a series of pictures are flashed rapidly across the screen at the rate of 24 frames per second. We begin to see the various actors come alive on the screen.

When the stream of pictures is slowed down, the reality hits and we see that there is neither a hero nor a heroine who appeared to be breathing, talking, fighting or singing.

UG emphasised, ‘ When thoughts slow down, one begins to 'see' clearly.' The ‘self’, could after all be the ‘virtual reality’ or ‘subjective reality’ coming into being due to the 'movement of knowledge'. Thoughts, in rapid succession, like picture frames in a movie, conjure up the illusory 'thinker'.

UG elaborated, “ There is no ‘I’ there ! What you call ‘I’ is nothing but the ‘movement of knowledge’! ”

UG clarified further explaining the basis for the 'self', "It is the 'observed' that creates the 'observer' "

When we look at a tree, he explained, we do not see the tree at all - we are caught up in all kinds of mentation and ideation. Two things happen - firstly we recognise the tree as belonging to a certain species and secondly we begin to associate it with the ideas of tallness (of its form), greenness (of its leaves), the sweetness (of its fruits), the coolness (of its shade) and so on.

Looking at the tree sets off ' the movement of knowledge' about the tree, bringing the 'I' , 'the knower' into existence, much like the actor in the movie. As long as there is recognition and naming (or verbalisation), knowledge is in motion and the movement gives rise to the illusion of the 'observer', 'I' or the 'self'.

UG pointed out, ' Reality is  a movement without direction.'

In our case, the ever changing, ever flowing movement of knowledge seems to be the only reality. The labeling of the movement as the 'I'  is more of a social or a cultural necessity. The society has its vested interest, has investment in bestowing reality or identity to the 'I'. It keeps resurrecting , concretising and validating the transitory 'I' for its own survival, to maintain its status quo. The entire superstructure of society revolves around the 'I' as its basic building block and will collapse like a pack of cards if the 'I' is invalidated.

UG, Nisargadutta and Ramana completely exposed the myth of any permanent, psychological entity or 'I' !

‘I’ seems to come into being whenever there is a need or a demand. Every situation in life is unique and different. There is a constant demand for knowledge to meet every situation, every challenge in the social, cultural environment. This demand triggers the movement of knowledge conjuring up the ‘I’ or 'self', every single time.

Apart from the demand from the outside world, there exists an internal or individual demand for achieving or attaining a certain goal or to become someone. Craving for attainment or achievement breeds the internal demand and keeps the movement of knowledge going, giving a sense of permanence to the 'I'.

As I am writing this piece, (my) ‘I’ is characterized by the movement of knowledge about UG and his statements, driven by the demand to narrate. But in the morning,  ‘I’ was a movement of knowledge of a different kind as I stood staring at the sprawling sea through the window. Yesterday 'I' was a different ‘entity’ while ‘I’ hosted friends and reminisced about people and events. Tomorrow, ‘I’ shall be a ‘trainer’ in the setting of a classroom, the 'I'  this time around being 'movement of technical knowledge'.

The 'I' comes and goes but is constantly resurrected and given a new lease of life by society or culture through its incessant demands.

UG had the last word on how to function intelligently and sanely in this imposed reality foisted on us by society, " Look, I am vulnerable,  I get affected by everything, everyone around me but I am not involved."

Only one who could see through the falsity , illusion of the 'self' could stay in society and still not get involved! 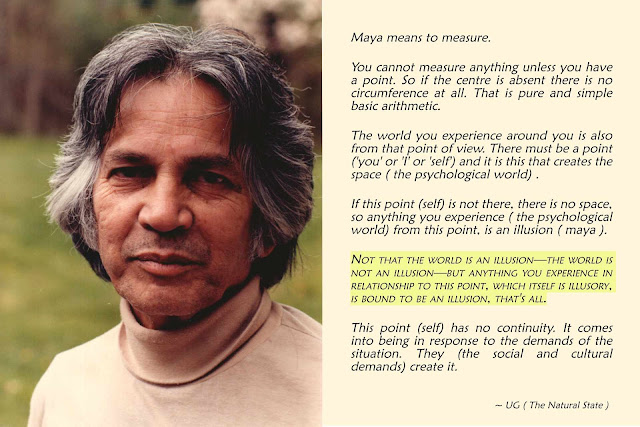